This article was written in 2018 as Santa Barbara was recovering from the disastrous fire and flood. It notes that real estate values were at an all-time high which indicated a “risk off” investment position. The pandemic and the Fed’s flooding the economy with $4 trillion in new money have caused asset prices to reach historical highs. This makes this analysis even more relevant in light of the subsequent frenzied scramble for better yields and better climes.

If you are a homeowner you will be happy with rising home prices. If you own commercial real estate, especially apartments, you are pretty happy, but retail property owners are less sanguine. If you are a renter, you are not happy because of rising rents and fewer rentals.

Real estate follows and sometimes leads the economy, so it is a good bellwether of the state of our economic affairs. While the popular notion is that we here on the South Coast are recession proof, we weren’t insulated from the housing crash that was the hallmark of the Great Recession: it was a long, hard slide. Our housing market peaked in 2006 (average, $1,734,000) and bottomed out in 2012 (average, $1,026,000), a roughly 32% decline in value along the South Coast. We weren’t too far off the national (Case-Shiller) average of a 38% decline.

Here is a chart from data source Zillow which shows market prices for single-family homes from 2008 to March 2018. 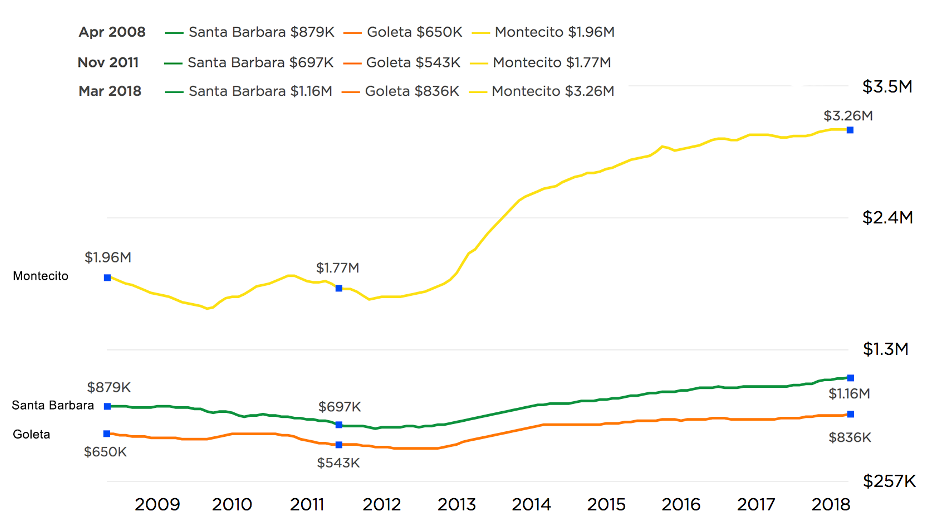 As you can see, home prices eventually recovered and we are back up to nosebleed territory. The South Coast average home price has increased about 46% since the 2012 bottom (vs. 47% for the nation). Montecito shot up a spectacular 84% since the bottom. Santa Barbara is up 66%; Goleta, up 54%. We can argue about the numbers but it’s pretty clear that home values are close to their pre-Crash highs.

Realtors are telling me that activity has picked up after January’s fire and flood: sales in March (82) were similar to March 2017 (85). While listings in March were down 12% from a year ago, they have steadily increased since January.

Montecito is another case. There are 111 listings for Montecito homes, but sales are down. Broker Maryanne Brillhart of MB Properties who has 40 years of experience selling Montecito homes says that there is a great deal of uncertainty hanging over the town as homeowners with damaged properties struggle to make decisions about their future. “There are buyers looking, especially in the undamaged locations and, hopefully, offers on good homes in good locations will continue to sell at good prices”.

A trend: Hope Ranch has become hot as Montecito recovers, driving some displaced Montecitans there.

On the commercial side there are very few properties for sale.

There are 11 apartment buildings for sale in Santa Barbara County, not including the Gelb portfolio of 66 apartments in Isla Vista. There are only 7 apartments for sale in the City. Prices are high, ranging from $320,000 to $500,000 per unit. A significant factor driving prices up are buyers in tax-free (1031) exchanges desperate to find deals in order to meet short time frames required by the IRS.

The apartment rental scene remains very tight in the City. There were only 46 apartments for rent as we went to press. Median rent for a one-bedroom apartment was $1,900 in March; two-bedroom–$3,000. They were a bit lower than prior months.

Commercial property deals slowed way down in Q1. Commercial specialists Radius Group and Hayes Commercial both said sales had dropped about 50% from a year ago. Steve Hayes of Hayes Commercial noted that office and R&D leasing has picked up in Goleta among tech and defense firms. Office space, he said, was tight in Downtown Santa Barbara, a sign of an improving economy.

Retail, however, is another story. Radius counted 63 retail spaces (319,000 sf) for rent in Santa Barbara, Summerland, and Montecito. I’m hearing from retailers and restaurateurs that business still has not fully recovered from our January disasters.

The big question is still the downtown State Street corridor. The management group that operates Paseo Nuevo bought the Macy’s building and plans to use it for pop-up retail, retail entertainment events, and dining. The Saks building (47,000 sf) remains a question mark as Saks plans to leave next year.

The problem with retail is not just Amazon and online retailing, although that’s a significant cause. About 10% of total retail sales are done online. The main problem is that there is too much retail space everywhere: about 23 sf of retail space per person in the U.S., compared to say, Canada with 11 sf. And spending patterns have changed. Big-spending Boomers are retiring and spending less, while debt-laden Gen Xers are less wealthy than their parents and spend less.

The answer to Downtown retail is not an easy one. According to John Goodman, a partner in Miramar Group, developers of the Waterline in the Funk Zone and two yet to open properties in the Downtown area, they see a confluence of micro retail spaces, innovative dining, and imaginative design as one of the keys to State Street’s rebirth.

Santa Barbara City Councilmember Randy Rowse says the City is rising to the challenge by fast-tracking projects and making it easier for retailers and property owners to move ahead in the planning process. Its Accelerate program prioritizes State Street projects, allowing them to jump the line in the review process. Rowse also organized a design charrette which asked Santa Barbara’s best architects to come up with innovative ideas to revitalize the downtown.

Turning to the Big Picture, the economy is looking good right now. While economic growth is below the Fed’s expectations (GDP +2.3% for Q1 2018), it is moving along, unemployment levels are the lowest since 2000 (4.1%), private domestic investment is strong, and inflation still at around 2%±.

What could possibly go wrong?

The problem is what Nassim Nicholas Taleb of Black Swan fame calls “fragility”. We all know what “fragile” is. Taleb coined the term “antifragile” which is when things become stronger when faced with stress, chaos, and disorder. Somethings break easily with stress (a vase). Somethings get stronger with stress (you when you work out). He believes, and I agree with him, that our economy is fragile.

In the economic world, failure makes things stronger. Economist Joseph Schumpeter called this “creative destruction”: good ideas emerge from bad ideas because we learn from our mistakes. When you cushion failure, no one learns, and bad ideas continue. The Fed and federal government cushioned failure after the 2008 Crash (bailouts, money printing, massive spending) and the underlying fundamental problems haven’t gone away. Their policies have increased fragility.

But with home values high, a good jobs situation, and a booming stock market, it’s easy to think the good times will last forever. How quickly we forget.

I’m not forecasting a recession, but I’ve been through enough business cycles to know when the red flags are up. These booms can last longer than the doomsayers say. But as usual, when these things bust we won’t see it coming. Risk off.

[This article was written post fire and flood when Montecito and Santa Barbara were trying to recover. What this post didn’t anticipate (how could I) was the scourge of COVID 19, a pandemic. The subsequent unprecedented printing of almost $4 trillion of new money flooded the economy and asset prices took off. Stocks, residential real estate, commercial real estate, and other risky investments have soared in value. These things are good until they aren’t. When the Fed seriously tapers its money bonanza and inflation and interest rates creep up, then it’s Risk Off. JH–October 26, 2021]