How To Not Fix Homelessness

There is a “solution” to homelessness. Enforcement of existing laws that take back public spaces is part of it. Housing and counseling is the other part. But it takes money and dedication to do this. If we want a better, healthier environment in Santa Barbara we need to start now and motivate our governments and charitable organizations to step up and commit to solve the problem.

Too use a well-worn phrase, the homeless (“unhoused”, “unsheltered”, “houseless”) are a blight on our fair city. It’s not that we don’t have sympathy for these folks, but when they are met on the street most of us steer wide of them. I’m not insensitive to the homeless, but from what I’ve seen on State Street and other city environs, I don’t think my assessment is unfair. Most people I talk to are of two minds on the subject. One part is sympathetic to their plight. The other part is that they blame them for their plight.

Santa Barbara isn’t alone. Just about every nice place on the West Coast has a homelessness problem. Each city deals with it in a different way. Most think they are “solving” the problem, but like us, it doesn’t go away.

The problem with a “solution” is that it really isn’t solvable. The best that can be done is to chip away at it and hope for the best. I say this after reviewing the homelessness programs of our City and the various support groups dedicated to serving the needs of the homeless.

Every year the Department of Housing and Urban Development (HUD) runs a homeless count in every community in America. The 2021 results are not out yet  but here’s 2020 vs. 2019: 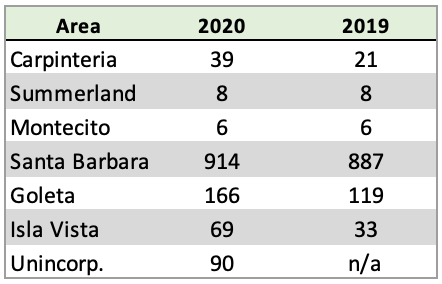 My guess is that these numbers increased in 2021. The South Coast has about 1,300 homeless individuals. The City says 43% live in cars which means about 740 are living on the streets or are in and out of shelters.  A lot of numbers are thrown around, so an exact count is difficult to pin down. Homeless people tend to come and go.

Who are these people? According to UCLA’s California Policy Lab 75% of the homeless suffer from serious illnesses, or mental health issues, or addiction. Often it’s all three. Mortality rates are three times greater for the homeless.

We are not talking about the single mom with kids who lost her job and is living in her car. She wants help and gets it. She is not panhandling, drunk, and sleeping on the sidewalk. The problem is mostly men who fit into the 75% category.

How do you deal with the problem?

You can’t lock them up for being homeless, mentally ill, or spaced out. The U. S. Supreme Court has ruled that most vagrancy laws are unconstitutional. You can move them off the sidewalks (see my article in the July, 2021 Santa Barbara Sentinel issue). This will help the public’s use of civic spaces, but these aren’t “solutions”.

It’s not that there aren’t programs available to the homeless. There are many organizations, private and public, that are dedicated to helping them.

Here are just a few:

Each of these organizations has programs to help rehabilitate homeless people. There are many more that aren’t on the list. Funding comes from a variety of sources: federal, state, and local governments, and private donors. They are sincere and dedicated. They point to their successes in getting the homeless sheltered, arranging medical care, counseling for addiction and mental health. Some believe they can end homelessness.

It’s a frustrating, difficult task. City Net, one the main providers of services under contract with the City, presents the case of senior citizen “Joe”, a veteran, sleeping rough for 16 years, addicted to pain medication, and disabled. To get him housed it took 13 months, 14 agencies, and 168 “interactions”. His “contacts with police” went from 951 to 2. A success.

Joe is not atypical. It is very difficult to get people like Joe off the street because of addiction, mental illness, or both. It takes time, patience, and money. Each client of these service providers has a staff of counselors and case workers to guide them through the process. Much of the money comes from the state and federal government. Unfortunately, many of the programs started during the pandemic are terming out.

While the City and County and their contractors point to their successes, they will admit that the successes often turn into failures. It’s often a revolving door of clients falling in and out of the service infrastructure. It’s frustrating for everyone involved. You have to admire these professionals for their dedication and faith in humanity.

There are solutions but we must accept the reality that we aren’t going to fix everyone.

One of the problems is that the more permissive local governments are, the more it attracts the homeless. Cities such as Seattle, San Francisco, and Los Angeles find that a large percentage of their homeless population migrated there because of lax camping, panhandling, and theft laws plus an abundance of services and funding.

Reformers point to Houston as an example of what to do. They, unlike Santa Barbara, vigorously enforce anti-camping laws. They prosecute those who commit crimes, small and large. They have a campaign to discourage folks from giving panhandlers money. But they also have funded housing and shelters for the homeless. They lobbied for permanent funding from the state for homeless rehabilitation services (mental health and addiction counseling, health care, job training, etc.). The result is that over eight years their homeless population declined by 54% (as of 2019 data).

It’s not rocket science. You enforce laws against camping, public drinking, illegal drugs use, urination, and defecation. You keep them off of State Street and Milpas (enforce the no sit, no lie, no sleep ordinance). You enforce existing theft and violent criminal behavior laws. And you make shelters available to those who will agree to go through social service programs. It’s not easy as witnessed by the struggle with Joe.

The lack of shelter is the problem.

The City has rented the Rose Garden Inn motel on Upper State Street for four months to house 50 homeless folks. There are only 35 rooms. It includes meals, transportation to and fro, on-site management and security services. No drugs, no drinking, no sleepovers, no fighting. It’s a tough job but clients will be exposed to all the social services that are available. The City pledged at least $1.6 million to fund it. The money will come from Measure C funds (the 1% additional sales tax revenue that was supposed to go for infrastructure). Measure C funds are not restricted and the City has discretion in spending it. But four months is not a solution. What do you do with these folks when they are turned out of the motel? They say it’s a start.

It’s as if the City just woke up and decided to do something about the problem. They are cleaning out camp sites using the fire danger as a cover. Yet they still are not vigorously enforcing the other laws that encourage homelessness. I checked out the motel’s web site they say they are booked from July 5 to November 1. It might be just a coincidence, but there are elections on November 2.

Here is what it comes down to. We can’t “solve” homelessness. There will always be the homeless—folks who don’t want to be saved, who want to live without restrictions on their habits, and find living rough in beautiful Santa Barbara to be acceptable. The best you can do is try. And chipping away at the problem costs money. Lots of money.

I think most people would be happy just to not see the homeless, whether on State Street, the beaches, or the parks. Again, it’s not that they aren’t sympathetic to these folks but they want something done. They want our leaders to recover the use of civic spaces for public’s benefit.

It takes money. But are taxpayers willing to pay for it? Will our senators and congress members fight to appropriate the many millions it will take to fund programs and provide housing? Will Santa Barbara’s many charitable organizations step up and help fund these programs? Are our council members willing to enforce the laws?

If these questions aren’t answered in the positive then nothing will change.