The real Donald Trump has revealed himself. His incitement of his hard core followers to assault Congress shows his contempt for the democratic process. Trump is now the leader of a powerful authoritarian political movement that he will exploit to regain the national limelight and serve his craving for power. On January 21, 2021 he will begin his campaign to take back the presidency. As he has shown he poses a danger to our fragile democratic institutions.

When Trump was running for president in 2016 I wrote a number of articles that were very critical of him. Looking back, one stuck out: “Donald Trump, Businessman, Politician, Strongman“:

Donald J. Trump gave the most startling acceptance speech I have ever heard coming from a presidential candidate. The thing that made his speech startling was his belief, or audacity, that he, Donald J. Trump, would solve almost every problem that we have. He brazenly told us, “Nobody knows the system better than me, which is why I alone can fix it.” …

… Instead of the mythical image, he has instead revealed himself to be cast in the mold of the classic strongman who gains power by lying and pandering with populist notions. But the inconvenient truth is that Trump’s ideas are dangerous for America and our economy and threaten the one thing that does make America great, our freedoms.

Most Republicans dismiss my comments with a “So you wanted Hillary/Biden to win?”. Moderate Trump supporters point to corporate tax reform, attempts at reducing regulation, and conservative Supreme Court appointments. I’ll give them that. But what about crushing a large part of the economy thriving on free trade? What about justice for hard-working immigrants who have been living here peacefully and successfully for years and are vital to our economy? What about massive out of control spending and debt that puts a brake on prosperity? What about abandoning 75 years of international relations and the political stability it brought? What about his abandonment of true health care reforms, leaving the field open for national health care? What about his incompetence and ignorance in dealing with the pandemic? What about his distasteful character that has cheapened the image of America and the presidency? What about his dangerous lies about the election being “stolen”?

Trump’s political legacy is a Biden government controlled by Progressives with a long list of programs that will rein in business with more regulations, increase corporate taxes thus decreasing our competitiveness, increase taxes on the most productive members of society—the 20% who pay 85% of taxes, usher in government-run national health care, and impose regulations for a radical economy-crushing “Green New Deal”, to name a few. With the loss of the Senate by the Republicans, there will be no stopping them. He left the Republican party in shambles.

The hope that when Trump leaves Washington he will abandon the national stage is unlikely. With Trump’s obvious megalomania and autocratic tendencies, he will be driven to reclaim the limelight. As a cross between Huey Long and Chance the Gardener, he could be dangerous, as witnessed by the assault on Congress.

Trump’s hard core followers are authoritarian types who eagerly respond to his rhetoric and calls to action. I recently read William Shirer’s Berlin Diary and The Rise and Fall of the Third Reich about the 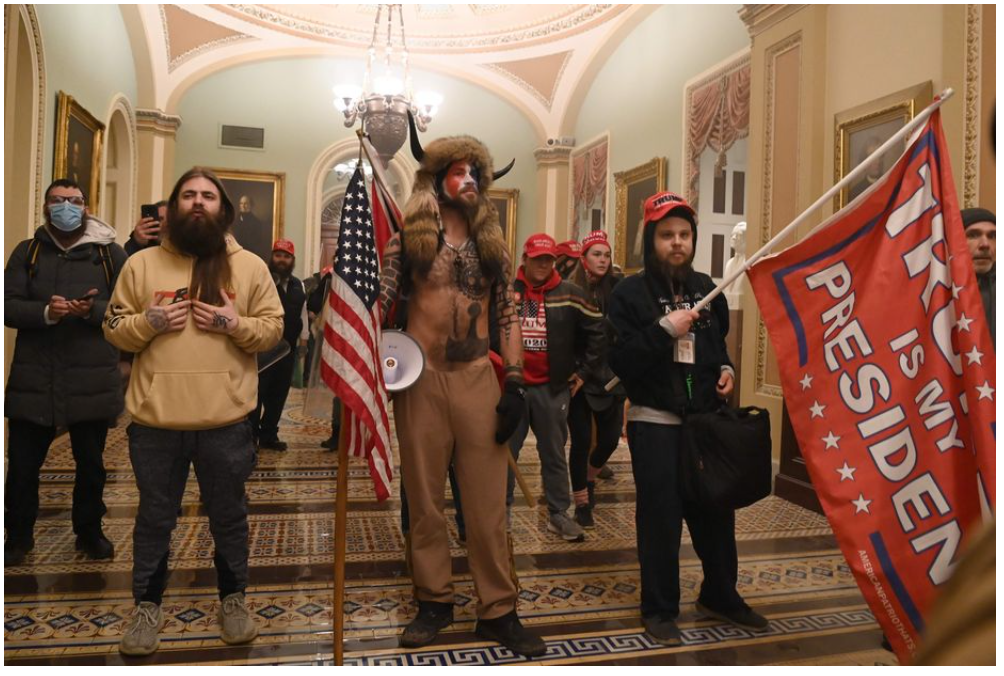 rise of Hitler. What is remarkable is that the “patriots” who supported Hitler and who responded to the lies spun by that charismatic strongman seem to be similar to many of Trump’s followers. These gullible people reject facts, history, and reason and believe whatever lie Trump utters. I’m not saying that Trump is Hitler, but, like other strongmen, he has the power to mold these folks into a potentially dangerous, disruptive force. If nothing else, he demonstrated that on January 6, 2021.

Peggy Noonan, in an emotional essay in the Wall Street Journal written the day after the riot, brought up an important point:

… [E]very human institution is, in its way, built on sand. It’s all so frail. [We] see how thin the veil is between civilization and chaos, and understand that we have to go through every day, each in our way, trying to make the veil thicker. …

We sit in our comfortable homes, away from the conflict, and assume everything is fine and we don’t have to worry or take any action. But we do. If you look around the world you will find that Francis Fukuyama’s “End of History“, the post-Berlin Wall worldwide domination of Western liberal values, is faltering with the rise of autocracies worldwide.

The reality of today is that both parties are morally, politically, and ideologically bankrupt. Especially the Republicans who have abandoned all pretenses of what used to be a conservative, pro-prosperity agenda: free markets, less regulation, lower taxes, fiscal responsibility, free trade, equality under the law, individualism, and personal responsibility. These ideals once drove Conservative policy goals. We know what the Democrats stand for. What does the Republican party stand for?

On January 21, 2021, Donald Trump will emerge as a strongman, the leader of a powerful political force. It is impossible to predict the result of this but he will exploit his followers to serve his craving for power and aggrandizement. Perhaps it is a stretch to see him resort to tactics of intimidation, but the reality is that he has the potential to do so. And that is a serious danger to our democracy.